A show less about politics and more about the selfish desires that exist in human nature. END_OF_DOCUMENT_TOKEN_TO_BE_REPLACED

What I thought of Dollhouse Season 2 END_OF_DOCUMENT_TOKEN_TO_BE_REPLACED

A spoiler-free look at what I love about Battlestar Galactica, Part 1: That wonderful population number… END_OF_DOCUMENT_TOKEN_TO_BE_REPLACED

I didn’t DISLIKE Moon.  I just didn’t like it.  Well, maybe I did like it.  I can’t honestly say, and I think that’s the power of the damn movie.  I was watching it, this movie, and I was waiting for the weird, charismatic robot to go and kill off the main character, Sam.  I was waiting for Sam to flip out, with guns and bullets and stuff and insanity and some ninja action.  Instead I got…well.  I mean, what did I get?  In the movie, we harvest the moon.  One guy is there to make sure the machines run right.  But, you know, he’s a clone (spoiler!) and there are more clones (spoiler!), so I was ready for the clones to sit down next to each and, you know, contemplate their existence.  What is it like to have an exact copy of you, walking around?  What is it like?  How does it feel? Do they have these conversations?  No. Do they have any meaningful conversations?  No.  It is another one of those “Lonely-Space” movies where the antagonist is millions of miles away or the enemy is ambiguous or the enemy is lurking around the corner, hiding.  But I didn’t DISLIKE it.  It just didn’t move me like I wanted.  Still, it was a beautiful movie, with amazing sets and some incredible voice acting by Kevin Spacey.  And Sam Rockwell.  Who is this guy?  He might be my new favorite actor.  I just wish I could make up my mind about this movie.

But wouldn't a Robot-Human Hybrid baby with a Laser-gun be so much more interesting?

The purpose of this post is, simply, to explain why this picture disgusts me.  I see it often.  It is the photo-art from the movie, The Notebook, based off the book from the same name.  The photo is Rachel McAdams and some dude that I don’t care about.  They are about to kiss.  They haven’t kissed yet, but they are about to.  This is what we call the “Rising Action” which leads to the “Climax”.  People read or watch movies for the climax but we enjoy the book or the movie for the build up, the rising action.  All we want is for the rising action to make sense and lead to the moment where these two people make out.  Why?  Well, part of it is because we all want to make out with someone and that making out with people we really like is actually pretty hard. Most times we make out with people we sort of like until we find the person we really like and then, damn it, once you reach the climax all that’s left is the Falling Action and the Falling Action is usually where I get my popcorn and head for the exits.  Here is my problem.  More and more, movies depend on this romantic situation to move a narrative.  Very seldom do we see movies that can tell an interesting story without the stink of a romance.  I’m not saying that romance is bad.  Please don’t confuse.  I’m saying that romance in movies is boring.  And you would have thought that, by now, we could have come up with a more original device to deliver a proper tale.  We haven’t.  Or, at least, not yet.  Here our three moves that I’ve watched recently.  Two of them deal with romance and one does not.  And I will actively explain why the last movie is, of course, superior.

END_OF_DOCUMENT_TOKEN_TO_BE_REPLACED

It doesn't hurt that she's smoking hot, either.

My life, currently, consists of the following.  Work and Not-Work. Not-Work is a catch-all because if I’m not working, anything that I do is basically the same thing because it isn’t work.  It is good to have clear, confined definitions.  What I enjoy doing, what I like to do more than working, is watching Science Fiction television shows.  Battlestar Galactica took up most of my time before, and since I finished that up in quick fashion, I’ve searched for a replacement.  Fringe isn’t that replacement.  But it will due for now.

The show is basically X-Files for us, people who hated X-files.  I have no problem saying that X-files was bad.  It was.  It made absolutely no sense and the lack of it making sense was supposed to be explained by, what exactly?  I mean, seriously. What was X-files about?  I don’t even care.  Fringe circles around this problem by having a clear and sharp focus.  There is a group of people experimenting on the human race like lab rats.  The Department of Homeland Defense doesn’t think this is a good idea.  There.  Done.  Was that so hard?

I like the show more now because I recognize the novelty of it.  I can see that, ok, there might not be a plan now, but the premise of the show allows for a plan to be formed later.  It still has that stupid “Mystery of the Week” feel to it.  If television shows cared less about its audience and the audience’s retard inability to follow a coherent storyline, and cared more about telling a coherent story line, I would like the series better.  But I’m just working my way through Season one.  We’ll have to do that whole “Wait and See” thing….

State of Play stars Russell Crowe and that really Hot girl from all those movies she’s in but can’t remember what movies she’s in.  What is it about?  Eh.  Part of it is about Politics and the issues that politicians have with keeping their pants on.  Part of it is about the wars in Iraq and Afghanistan and the out-sourcing of security to dudes like Blackwater.  And part of it is about the downfall of newspapers.  But none of these are really committed to each other, and the movie suffers from a complete lack of caring by the actors, the director and the audience.  But, I mean, you do get to see a ton of local DC flare.  And the result is that you are not missing much if you don’t get to see a ton of DC flare.

Man. I wish I was a hot Cylon girl. Wait, what?

I don’t care if you like Battlestar Galactica or not.  Nobody asked you!  Season 2.5 ended with some good, good stuff.  The human population inhabited a planet that looked like New Jersey on a crappy day.  The Cylons, of course, popped up and took over the planet and humans.  The Battlestars Galactica and Pegasus both got the hell out of there, leavving New Caprica to be ruled by the Cylons.  I know!  Sounds like awesome times badass equals dope!  Well, season 3 didn’t start off with the fire I had hoped.  The first show was one big, annoying metaphor for the Iraq War, suicide bombs and all.  The second show sort of highlighted a fat Commander “Apollo” (Fat suits are really stupid).  There is still plenty of drama.  The Cylon “Sharon” that is in love with Helo is still all confused and stuff, helping the humans.  Admiral Adama is still the baddest leader this side of Captain Picard.  And everyone is having sex with everyone else.  There is something fundamentally missing, however.  I’m not sure if it is just that typical middle arc slump or maybe it is Edward James Olmos’ silly mustache.  There is a fake suspense, a looming idea of dread and fear that the show doesn’t deliver.  It just says, Hey, you should be afraid and worried!  Instead, we are just  a little bored.  It was Space and how these humans lived out in the middle of it that gave us the drama, not this weird occupation story-line that fails to deliver tension even though it should.  Eh.  It is still the best sci-fi show that wasn’t cancelled prematurely. And how hot is the Lucy Lawless Cylon?  Geez. Smoking hot.  And I still want a shirt that says, “I’m not a Cylon”.  Can anyone do that for me?  Please?  Anyone?  Hello? 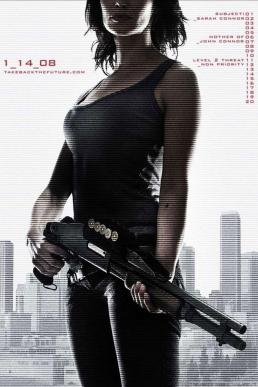 It was a good show.

And the worst part about it is that there is a whole population of people that will never, ever see it.  Terminator: The Sarah Connor Chronicles has been canceled.  It is gone, and won’t be coming back.  Just like Firefly, a great television show has been taken off the air because not enough people watched it.  Good television doesn’t have the luxuries that movies and books have.  A book or a movie can find an audience years later.  A television show rarely is allowed to become fleshed out, to breath, before executives with dollar signs begin to touch and pull on it or just destroy it completely.   The sci-fi site i09 has done a wonderful job covering the lose of a brilliant television series.  Here is a piece from a rant by Charlie Jane Anders.

These were real, complicated, messed up people, making mistakes but also being brave and generous, in the face of the probably inevitable end of the world. You couldn’t help but root for them.

And here are some last words from producer Josh Friedman.

I prefer to watch characters try and fail and try again and sort of succeed a little and maybe fuck up again. That’s what I want to see. Flawed people trying to figure their shit out. Because that’s me. We’re not perfect parents or lovers or friends. We’re not heroes. But we can do heroic things once in a while, sometimes even on purpose. So TSCC is a sloppy mix of hope and despair and that suits some people just fine and others don’t have a taste for it. I’ve made peace with that…But my show got canceled. So what do I know.